About the HondaEngage HOST Team

Though she would really like to have a more worldly past, Shelsa McEntee-Smith was born and raised in Ohio, attended Capital University majoring in Communications and Musical Theater (in Ohio), and has worked in marketing positions in the retail, hospitality, and professional sports industries since graduation – focusing on graphic and web design, copywriting, event coordination, and social media (all in Ohio). She started with the Honda Engage team assisting in the coordination of conferences, events, and supplier trips for the Honda Supplier Support department, including new technology and social media initiatives. She now manages the training program for Honda suppliers throughout North America.

Shelsa currently resides near Marysville (Ohio) with her husband Ryan, their daughter Ianna, and son Kelby.

Dying for some random Shelsa facts? Good. I knew you were. 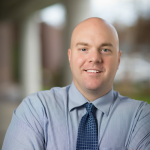 Being an Army brat growing up I had the opportunity to live in Europe (West Germany) for three years. I lived predominantly in the United States from the west coast to the deep south. So if you listen closely you can probably hear a southern drawl! I graduated from Western Kentucky University (Go Big Red!) where I received my bachelor’s degree in Graphic Design.